Editor’s Note: The University of Washington’s School of Aquatic and Fishery Sciences (UW-SAFS) will celebrate its centennial year in 2019. As alumni, my husband Chris Sergeant and I were asked to write an article for a series about partners who met each other at UW-SAFS. Our article below was published as part of the Centennial Story series, along with other contributions from our friends and colleagues: https://fish.uw.edu/2018/08/centennial-story-24/. We have lots of great memories from that time and enjoyed reminiscing about the early days of our relationship as graduate students in Seattle.

During my final quarter as a Master’s student in 2004, Anne and I had already become good friends and regular study buddies. We shared mutual embarrassment when Dr. Don Gunderson looked over our shoulders and could barely hold back his disappointment as we struggled to fill in an age-structured Leslie matrix. Our early days as friends shaped our future together. Anne likes to believe she shifted my dreams of semi-pro bass fishing and lure testing to PhD fisheries researcher. In turn, I honed Anne’s research acumen by increasing her acceptance of salmon and freshwater ecosystems as legitimate and interesting study subjects. –Chris

“Have you ever tried a drop-shot rig for lingcod?”

This was said during Chris’ intensive bass fishing phase, when he tried to bring his warmwater recreational sensibilities to a marine reserve in the San Juan Islands. It turns out that the drop-shot rig worked great, as did sight fishing for aggressive lingcod in the kelp canopy. I had many volunteers help me fish for science over the years – around 60 in total – but Chris was the cream of the crop. He had the highest catch per unit effort of any volunteer (yes, I kept track) and also picked the best snacks. We wrote a rap together about the life and times of Jethro, one of my acoustically tagged lingcod, as we tracked his stealthy movements through the night. It was in the field where we really got to know each other. Chris helped me hook lingcod in the San Juans, I helped him pull gillnets on Lake Washington. In the early days, we debated (only half-jokingly) about the merits of fresh- versus saltwater ecosystems; in the end, we have found shared curiosity and wonder in both places. –Anne 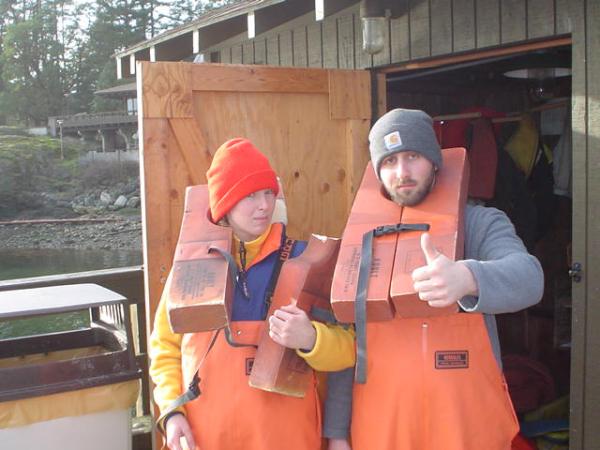 Safety first for Anne and Chris at Friday Harbor Labs, circa 2004. Photo by Danny Garrett.

“We can move wherever you want, except to an island.”

It was time for Anne to realize her years of hard work and find a fulfilling faculty position. I did my best to keep an open mind about potential locations. Juneau – with no connection to a continental road-system and surrounded by impassable icefields (i.e., basically an island) – was pushing the limits of my comfort zone. But we did it, and seven years have flown by. Anne is an associate professor of fisheries at University of Alaska Fairbanks and I am an ecologist with the National Park Service. We still go fishing and even write the occasional paper together. In 2014, we welcomed James Neil Sergeant to the world and have enjoyed watching him become a resilient, puddle-loving Alaskan kid with an intense interest in everything around him. –Chris

Fishing is a family affair now. Photo by Eric Ward.

“Hey Dad, the velcro star has a lot of pedicellariae.”

Our stomachs dropped. Was our only child going to become an invertebrate biologist? Until recently, our almost-four-year-old was not a big fan of boats and we would have to lure him (pun intended) onto ours with donuts. Fortunately, young James seems to enjoy all manner of aquatic creatures – the finned, the spiny, the squishy, and the slimy. Chris and I both still do a lot of fieldwork, so James is often parented by one of us at a time in the summer while the other is off doing “fishy work.” It’s just a matter of time before he’ll be right alongside us in the field, teaching us how to identify sea stars and reminding us of the joy we felt when we held our first fish. –Anne

With fish nerds for parents, James is already learning the tools of fisheries ecology. Photo by Cheryl Barnes.