Experiences in data organization and management

It was 2 AM the week before a fisheries conference, and I was attempting some last-minute analyses. Having added a couple hundred lines of new code for figures, my code would no longer run from the beginning and I had a hunch it was because I hadn’t set everything up correctly initially. Ten hours and 25 Stack Exchange posts later, I had the realization that no researcher wants to have: my data needed to be completely reorganized from the ground up. I should have organized my data months ago (or ideally from the get-go) but instead I ignored it until it became absolutely necessary. Further complicating this issue was that I am a remote student working in Sitka (most of the faculty and students are in Juneau or Fairbanks) so finding the solution was entirely on me. Data organization is like working out or eating healthy: we all know we should do it, but often it is given the “I’ll do that tomorrow” excuse. Out of this minor meltdown, I learned a lot about data organization and management and even how to overcome roadblocks independently. 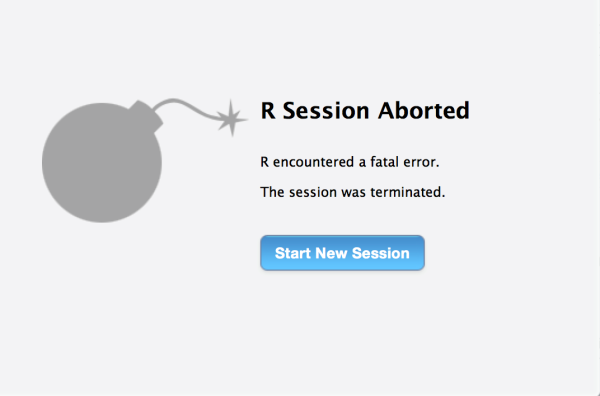 The message you don’t want to see at 2 AM when you’re trying to finish a presentation. Source.

It often feels that life as a remote student is all about learning things the hard way. Being on my own in Sitka, I can’t walk down the hall to talk with another student about a problem or spontaneously chat with a professor in passing or after class. Only having my screen in front of me, I don’t have much opportunity to compare other students’ code writing techniques or data management practices. With my complete dataset nearly 4 million lines long, bad habits were started without corrections: developing a “run the code until it’s broke” philosophy, overwriting and deleting code I didn’t think I’d need, and even naming files poorly by just tacking on another number or “new” at the end of the name.

While these are now commonsense practices I avoid, I learned these after much trial and error, as well as after reading other articles on data organization and management using R. There are many other struggles that come along with being a distance student, but I believe it ultimately pushes me to be a better researcher. And the best part of being remote is no one can see your meltdowns! But you don’t have to wait until you are in a panic to start some best practices.

What typically happens when you don’t follow best practices for coding in R. Source: https://imgur.com/gallery/x0ml8

Careful organization and management of data and code is essential for any analysis. Taking the time and initiative to make clear notations for code, to be consistent with code-writing techniques, and to organize script files in your directory will help with more than data management of the entire project. These steps also protect against data loss and analytical errors while allowing your analyses to run smoothly from one to the next. There are many tips and tricks for data management taught in classes and online, but here are the top five I’ve learned from my solo trek to good data practices with links to more information on each:

As her code now runs flawlessly, Rhea can relax and enjoy tea while finalizing a figure in R over winter break.

Even though data management ranks up there in fun with tasks such as doing your taxes, folding laundry, and weeding the garden, the short-term pain will save you a lot of headache and time by having a well-organized and accurate end result. As I move onto new analyses for the next chapter of my thesis, I now know how important it is to set things up correctly from the beginning. Being a remote student during all of this has been challenging, but it has ultimately made me a much stronger student and more self-reliant. Meltdowns not included.

Rhea is a Master’s student in the Coastal Fisheries Ecology Lab and is studying the movement ecology of juvenile sablefish near Sitka, Alaska.