I recently had the opportunity to participate in the final leg of NOAA’s sablefish stock assessment longline survey. I’m starting a Master’s program focused on juvenile sablefish, so taking part in this survey and observing some of the ins and outs of longlining will provide a valuable perspective as I conduct my research. That said, thriving at sea was an adjustment that this landlubber never quite made.

Before boarding the plane to Kodiak, I bought a jump rope at Second Wind Sports so I could keep training for the Klondike road relay on the boat. It turned out to be a kid’s jump rope and since I’m well over four feet tall it didn’t work. “That’s ok,” I thought, “there will be plenty of line on a longliner to make my own jump rope.” This turned out to be a lost cause. Between queasiness and boat rocking that was incompatible with jumping I never got a chance. Fortunately, the Klondike is as much about fun, cheering, and sleep deprivation as running fast.

“Just think, you could be selling insurance in Detroit for a living, Matt.” –Captain Sam. Photo by Matt Callahan.

Our vessel was a 150-foot longliner, the Ocean Prowler. Captain Sam was a soft spoken, kind, confidence-inspiring seaman who always had a smile on his face. The chief engineer, Frank, counterbalanced Sam’s sometimes reserved manner with a story or opinion for every occasion. Josh joined the crew last minute as the cook and impressed all of us with high-end, restaurant quality food. He can also cut apples so they look like swans, or possibly albatross. The rest of the crew were either deckhands who operated the longlining gear or processors who packaged fish after it was brought on board. There were four biologists on board: chief scientist Karson, Sabrina, Denis, and me.

A juvenile sablefish that was tagged on a different survey near Sitka, Alaska. Photo by Kari Fenske.

The survey samples the same stations annually throughout the Gulf of Alaska over the course of the summer. At each station, we set two lines and a set is divided into 80 skates (lengths of groundline) with 45 circle hooks, each separated by a cannonball weight. We counted and identified every fish caught. Sabrina or Denis stood in a phone booth-sized box on the upper deck, above the roller that pulls in the line, with tablets to record their observations. Whoever was not on deck duty noted the sex of the sablefish and measured all fish with a fancy electronic fish measuring board. Karson and I collected otoliths, which are bones in a fish’s head with annual growth rings that indicate its age. The sablefish otoliths were sent to Seattle for analysis after the survey. (Dear analyst: We tried to clean off the otolith vials and boxes well, but if they’re still foul with fish gore, I’m really sorry!) We also tagged and released some of the sablefish. The deckhand would flick each fish off its hook into a net and we would insert a small numbered tag into its back muscle then release it. Rewards are offered for recaptured fish and the data allows us to track sablefish movement and growth.

A baby Pacific octopus (later released alive) and me. Photo by Karson Coutré.

Our most exciting catches were two sleeper sharks on shallow, gully stations. These massive predators thrashed around on the bottom and created horrible tangles in the lines. We also caught a lot of giant grenadier, which dominate biomass at the deeper end of the sablefish habitat. Apparently, considerable effort to try to do something useful with their meat has been fruitless.

Seas up to twelve feet tossed us around for much of the leg. I started off taking the king of seasickness medication—the coastguard cocktail. It’s supposed to prevent nausea while keeping you alert, but I still felt like a tired, duller version of myself and slept eleven hours each night at first. I never got violently seasick but never felt fully well either.

Despite the internal malaise, I enjoyed many aspects of the trip. We saw spectacular sunsets, though the weather would often return to gloom by day. Sperm whales swam close to our boat before diving to pluck fish off the longline. These huge, weird, ocean monsters are known to steal commercially caught fish from longlines in an act called “depredation.”

We saw albatross and several other offshore birds. Sabrina is a major bird enthusiast and helped me learn to identify them all. She has a powerful camera and got good pictures of brown and masked boobies, which are among the few confirmed sightings in Alaska of those species. Unfortunately, I missed them but still got to share in her excitement. Thick clouds denied us a view of the much anticipated solar eclipse and made for a very anticlimactic dramatic countdown. It only would have been a partial eclipse up here anyway and apparently no one could see it in Juneau either. 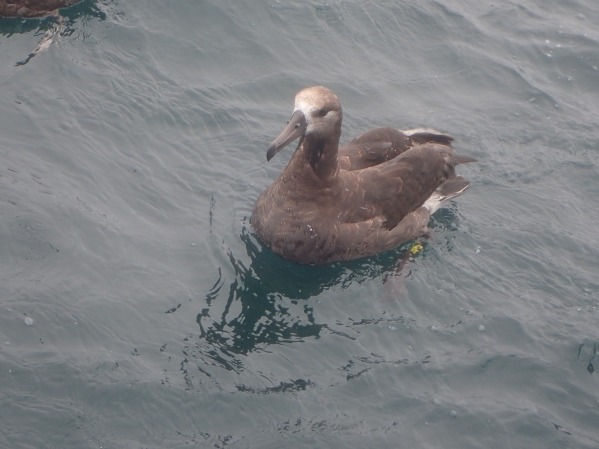 Some of the Albatross have identification bands on their legs. Sabrina, one of the biologists, took pictures of the numbers when possible. Photo by Matt Callahan.

After two weeks at sea we finally pulled into Dutch Harbor. The crew were grateful for the amenities of shore. Some of them would go home to see their families, others would re-embark on the Ocean Prowler in a couple of days to fish for Pacific cod (“P-cod”). Karson wished the trip lasted longer—she feels most alive at sea and fieldwork is a major highlight of her job. When I stepped off the boat and felt the ground unmoving under my feet, an irrepressible grin took over my face. I hadn’t transformed into a salty mariner, but I’m still glad I went.

To learn more about what it’s like out on the longline survey, please check out this video made by former fisheries student and first rate human being Phil Ganz: https://vimeo.com/144235708.

Read more about the sablefish research being done by the Coastal Fisheries Ecology Lab, including current graduate students Matt and Rhea and alumna Karson, on our current projects page.